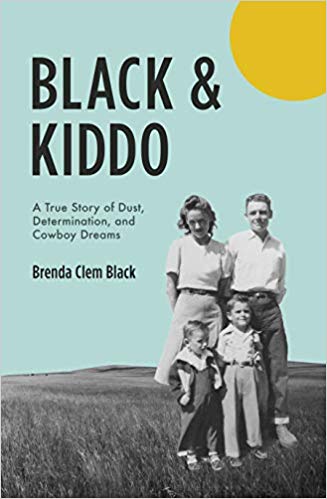 Arkansas writer Brenda Clem Black’s memoir about her husband’s family, Black & Kiddo: A True Story of Dust, Determination, and Cowboy Dreams(Et Alia Press, 2018) has been garnering awards since its publication in August 2018.

The book took top honors at the annual awards banquet of the Ozarks Writers League in Branson, where it was named Best Book of the Year 2018 and also won the President’s Award trophy for best overall.

The cover, designed by Black’s graddaughter, Rebecca Black, was named a finalist in Best Cover Design in the national Indie Book Awards.

Black & Kiddo is currently in the running for both the Will Rogers Medallion Award and the New Mexico/Arizona Book Awards in two categories: Biography and Cover Design.

Black will travel this month to the Fort Worth, Texas, stockyards to attend the awards ceremony for the Will Rogers Medallion.

In November, she will attend the Awards Luncheon in Albuquerque where the winners of the New Mexico Book awards will be announced. A significant portion of the memoir  is set in New Mexico, with Texas and Arkansas also among the stories’ landscapes.