“Would you tell me, please, which way I ought to go from here?”

“That depends a good deal on where you want to go to,” said the Cat.

“I don’t much care where—” said Alice.

“Then it doesn’t matter which way you go,” said the Cat.

“.—so long as I get somewhere,” Alice added as an explanation. 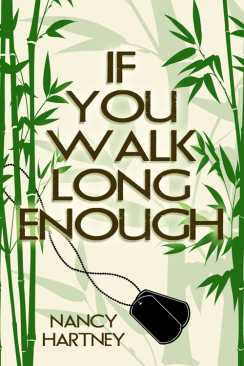 The deep South resonates through Nancy Hartney’s novel, If You Walk Long Enough. Do not, however, expect honeysuckle fragrance on shaded porches in tranquil twilight.

Vietnam has chewed up and spat out Reid Holcome, his wounds secret. Plunked down on the family tobacco farm he fled before joining up, he finds nothing and everything changed. While Reid  tar-stains his hands through harvest to save the farm from Big Tobacco’s manicured grasp, Hartney draws the reader through time and place, peeling bare his yearning for what he left behind in Vietnam, juxtaposed with haunts.

Reid and his estranged wife struggle through a love/hate relationship complicated by lesbian desires she explored in his absence. Even his neighbor Joe’s black skin remains black despite similar battlefield experiences in Nam—minus respect. White thugs endanger Joe’s family before Reid’s prejudice softens a millimeter. The only way out for either man appears to be somewhere else.

Sense of place and a format that characterizes the novel’s concept earns my five stars for If You Walk Long Enough.

If You Walk Long Enough is available at Amazon and elsewhere.

Raymona Anderson is the author of Two Hearts in Time and Bitter Pills and Deadly Potions.

Raymona Anderson is an Arkansas writer whose novels combine romance and adventure.

2 thoughts on “Review: If You Walk Long Enough by Nancy Hartney”